So: a mere 23 years after discovering the World Wide Web at TVOntario, this is my first real blog post. It’s taken a while to distill my thoughts. 8->

I’ll be leveraging my edtech-soaked obsessions with digital identity, online community, lifelong learning and career development, and this will be a combination of speculation, evaluation, reportage and related rabbit holes from the perspective of an advocate and active participant. I’ve been pretty active on social media such as Twitter and  Slideshare; this should help fill the cracks with longer explorations of the ideas that I’ve been sharing there.

Nothing like setting yourself up for trouble on your very first blog post, but it is January 1st after all, and it seems only natural to look ahead at the coming year. I may regret this 12 months from now. Or I may feel like a genius.

Open Badges have followed an interesting path since the idea was sketched on a napkin after the 2011 MozFest in Barcelona. 2016 will mark 5 years since their inception. Are they poised for the big time, or is this concept still “ahead of market adoption”, to quote Madison Area Technical College’s Academic Plan for 2014-2107?

This is the one I have most control over: my company Learning Agents is working with Discendum to launch a clone of the complete Finnish solution on Canadian servers in early 2016.

I’ve been an early and staunch supporter of Open Badge Factory (the issuing platform) and Open Badge Passport (the complementary storage and display platform) since I invited Mozilla Foundation to introduce Open Badges at ePortfolio and Identity Conference (ePIC) in 2012. Mark Surman couldn’t make it except via this video clip:

…but Carla Casilli and Doug Belshaw (then at Mozilla) did a great job of inspiring the European ePortfolio community that June in London in 2012, including Eric Rousselle, CEO of Discendum from Finland.

Eric and his development team at Discendum conceived Open Badge Factory as a solution for educators and trainers to issue Open Badges in distributed learning environments (ePortfolio, LMS, online community of practice, face to face) but to manage them centrally, ensuring coherent issuer control and avoiding badge fragmentation (because “badge rot is real!”).

More recently, they introduced Open Badge Passport as a more robust and flexible alternative to Mozilla Backpack. This loosely coupled tandem of Factory and Passport should be more flexible than the tightly integrated competition. We’re betting so at Learning Agents, and I’ve been very impressed with the momentum of innovation that Discendum has been able to sustain over the past two years.

A micro-credentialing solution housed on Canadian servers will be “PIA-friendly” (PIA= Privacy Impact Assessment), and therefore more attractive for Canadian academic and public institutions who may be interested in micro-credentialing, but concerned about PIPEDA, the US Patriot Act and related privacy issues. The fact that it originates from a country which respects privacy and is known for its educational outcomes doesn’t hurt either.  The Canadian service will be re-branded to avoid confusion with the original that continues to be offered from servers in Finland.

More on this via other channels in the coming weeks.

Nate Otto has been doing a great job wearing half a hat as Interim ED of the Badge Alliance in addition to his duties at Concentric Sky. I’m hoping that 2016 will see greater stability for the mandate and funding of the Badge Alliance so that Nate and other stakeholders such as LRNG are able to steer the Open Badge Infrastructure (OBI) standard from 1.1 to 2.0, sometime in the summer of 2016.

The standard has holes in it and anyway must continue to evolve in a changing environment and growing awareness of its potential as a building block for learning and recognition pathways. Details of the scope of changes for 2.0 are still sparse, but watch the OPEN BADGE STANDARD WORKING GROUP for details as they emerge.

Version 1.1 brought us Extensions, which enabled all kinds of new functionality, and we haven’t harvested anywhere near the total benefit of that yet. Because Version 2.0 is a major upgrade, expect some things to break from previous versions of the OBI, but also expect accessible migration paths.

The most obvious example of Endorsement is a standards organization endorsing badge issuers and/or the badges they issue, but could also include consumer or stakeholder community endorsement, such as by employers, industry associations or regional networks. 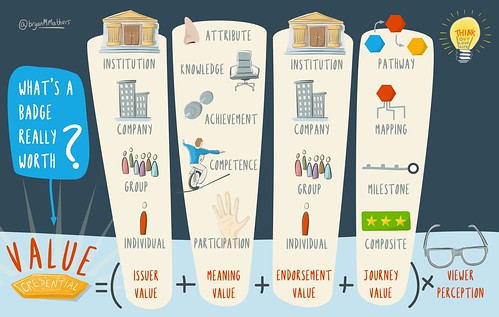 This is one of the barriers holding back cautious potential issuers and consumers from adopting Open Badges. Endorsement is now theoretically possible via Extensions in version 1.1 of the OBI, which have already been used to enable distributed issuing networks (“badge sharing“) and geolocation. Version 2.0 of the standard may also have a role to play.

Expect to see one or more OBI-compliant implementations of Endorsement in 2016.

This is another “popular” barrier to adoption for early and late majorities. Assuming an Open Badge is of “good quality”, where does it fit, what is its relevance? How can you use it to recognize the skills and abilities of the earner? The OBI makes Open Badges technically “portable” between contexts, but how is a badge in one context meaningful in another?

One way is to align the badges to standards. This is already starting to happen with Teacher PD and the ISTE standards (see both Digital Promise and  PD Learning Network in the US)  and in the world of IT with the Skills Framework for the Information Age (SFIA) framework (see QualIT example from New Zealand and this proposed model from South Africa…there will be one from Canada in 2016, if all goes well.)

However, the OBI doesn’t currently support Alignment very well…in the standard it’s just a single URL with an open text description. What’s needed is is a standardized way of referring to a framework and where this badge fits in that framework. This will improve things such machine readability, discoverability and modular development pathways, helping Open Badges achieve their potential as developmental building blocks in interoperable skills ecosystems. Myknowledgemap‘s Justframeworks.com from the UK may be useful in this regard. It’s a simple solution that avoids leveling where possible, although I am sure there will be other solutions that are more complex and may still be simple enough to work. I was hearing again recently about Simon Grant’s InLOC specification in this regard.

Expect to see some meaningful progress on this file on several fronts in 2016.

What if you gave a badge and nobody cared? This is true of far too many badge systems. Open Badges are easy to do…badly. A common shortcoming is an over-emphasis on what’s easy for a single instructor to do: formative, “gamified learning” learning strategies to engage (torture?) students inside the context of a course. If there’s no meaning for the badge beyond that course, no redeemable, summative value outside of the context, why:

There’s nothing necessarily wrong with using digital badges for gamification inside a context – Khan Academy is a decent example of this. But that’s not why Open Badges were invented, hence the tagline: “Get recognition for skills you learn anywhere.” For ongoing meaning, there has to be a summative recognition value to the badge:

Summative recognition implies someone doing the summing up: the badge audience (or “consumer”). It can be an audience of employers, admissions officers at educational institutions, or any entity that needs to assess the capabilities of a candidate. A clear awareness of audience is typically missing in hasty badge implementations. Good badge system design engages badge audiences early, sometimes even giving them a chance to co-create the badges. Then, when candidates approach them with these badges, they are a familiar currency.

All well and good, but it can be an exhaustingly incremental process to build badge audiences org by org, or even sector by sector. What if you could bring a representative group of stakeholders together for a community or region to put Open Badges and common skills frameworks onto the local radar and vocabulary?

Excitingly, this is what’s starting to happen in these places:

I also have hopes of helping get something similar going in BC’s Lower Mainland. I’ll be encouraging and tracking all this in 2016.

Serge Ravet started this conference about ePortfolios in 2003 and I’ve attended every one since 2004. It’s my favourite conference, because it’s always been about staking out new territory.

In recent years, I’ve played more of a role in helping with the programming. I was able to introduce Open Badges in 2012 with Serge’s enthusiastic approval, and since then Open Badges have gained in prominence every year. That’s not surprising, because they represent a less monolithic, more modular and often complementary enhancement to the mission of ePortfolios.

This year, Serge’s organization ADPIOS is partnering with CINECA, the Italian HE consortium behind the new Bestr badge solution, to offer ePIC 2016 in the fascinating city of Bologna:

I *think* the dates will be October 27-29. We’re still finalizing the details, but should be able to issue the Call for Contributions soon.

This promises to be a banner year for ePIC. I’ll be returning to it in future posts as the year progresses.

Wow, this took a while; I hope it hasn’t been too long a read for you. I’ll be working to get quicker and pithier in future posts.