This post continues an exploration of how Open Badges can support Personal Learning in Open Learning Networks. Open Educational Practices, if you will.

If you’re not interested in the more technical aspects of edtech, please bear with me. I’m laying the groundwork here to set up a wide array of practical applications in areas such as:

I’ll be exploring those in future posts.

Today’s post is part of a series that is inspired by #NRC01PL, Stephen Downes’ Personal Learning MOOC. It picks up on my post from last week, which, among other things, said that Open Badges are becoming machine-readable nodes in open networks.

I believe that Open Badges can play a key role in what Stephen Downes calls the Metaversity:

Stephen explains it in his companion video presentation. The metaversity is a modular solution to an issue expressed by Michael Feldstein back in 2005:

So I looked at the pieces in Stephen’s diagram and reflected that Open Badges are pretty modular too. They’re JSON-LD objects, composed of standard fields with links to other information objects and they’re intended to be combined in pathways, stacks and clusters, based on the information they represent. 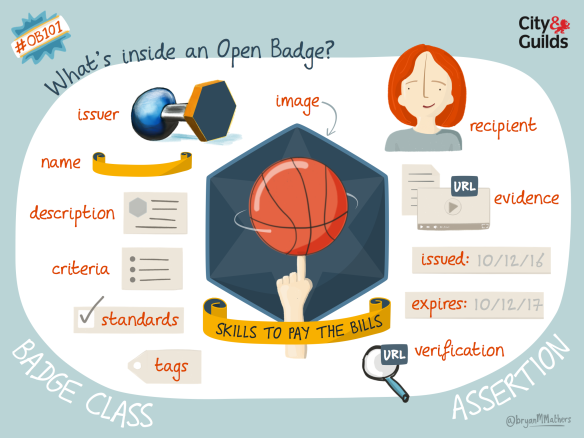 I decided to make the following diagram of my own as a one-page thinking tool, drawing from the Open Badges Specification, the Badge Alliance 2016 Roadmap, Nate Otto’s March 9 update on the Badge Alliance Standard Working Group, loosely coupled with my own delusions:

Apologies for the fine print detail – I’ll eventually make it simpler image to communicate better (you can try “view image” in the meantime). But the having the detail on a single page is helping me think through the following:

Knowledge and Learning Resources are diverse

They can be people, content, metadata, and even badges to name a few. This is what I was trying to get at in my last post about the “Internet of Badge Things”.

Learning doesn’t flow in just one direction. Open Educational Practices talk about knowledge ecosystems with feedback/remix loops. The notion that learners bring value to the equation is something that’s most familiar in adult learning and the college system, but it’s more or less true everywhere. So why can’t a badge earner’s evidence become a learning resource, whether they’re curating and remixing somebody else’s work or coming up with something new?

I actually had a similar thought in the 1990’s while leading the Online Group at TVOntario. But I wasn’t able to do much with it, other than code name it Boswell and make a diagram I can no longer find. Maybe now?

Open Badges develop most of their value after issue

There’s been a lot of attention paid to the value that can be baked into a badge at issuing time, but  that’s really just potential value (I’m talking the summative side here).

It’s when a badge is shared and recognized that its “mint” value hits reality and becomes exchangeable currency. This will happen in social settings: online communities, badge clearinghouses, job and work portals, and also in peer to peer exchanges, via emails, blockchains, personal open ledgers and other methods we haven’t thought of yet. This isn’t just my thought… my colleague Serge Ravet has been saying it for ages.

I’ll add a connectivist point here: it’s not just the resources and nodes that have value, but the way they’re connected through patterns of use – the network cluster.

I think that the emerging Open Badges ecosystem is a similar distributed knowledge and learning architecture to the one Stephen describes in his presentation and can indeed supply a lot of the virtual routers and cabling for Stephen’s vision.

Issuers can be earners, earners can be issuers, and anybody can be an endorser of a kind. Agents, objects and connections can exist at many levels.

This has the makings of an emergent knowledge and innovation ecosystem – the network as a learning thing. There is value in the badge itself and in its relationship to its environment. It’s potentially much more than a top-down credentialing protocol for training and education, though it can certainly do that.

These last few blog posts that are connected to topics in #NRC01PL have been difficult for me to write, but I think it’s because I’m rewiring my thinking as I write, making my way through a few conceptual thresholds. This rewiring promises to make my future badge system planning more robust and flexible.

All this may seem pretty esoteric, but consider the following possibilities as examples:

I’ll be coming back soon to focus on current examples out there and more immediately practical concerns for Open Badges in early 2016… blame #NRC01PL in the meantime.

Closing plug: join us at the 2016 Digital Badge Summit

There’ll be something for everybody: K12, Higher Ed, PD… Nate Otto and I will be curating a “Hot Topics” thread.

I’ll also be sticking around with Eric Rousselle and his colleague Nilü for the ISTE conference afterward to help introduce Open Badge Factory to the US K12 community, along with an exciting new offering for the Canadian K12 community. More on that later.